Home / About the Book 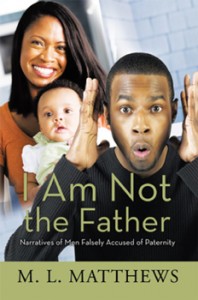 “I was involved in a paternity case some time ago, and the mother of the child in question fell asleep in death after taking a paternity test, but before the test revealed I was not the father of the child she said I conceived. I consider that situation tragic on many levels. First, the child in question was never able to develop a relationship with her biological mother. Secondly, that entire family lost a smart, beautiful, loving person. Thirdly, I wonder if the child ever found out who her biological father really is. It is a tragedy if she does not know. The narratives collected for this book are designed to help people understand the experiences of men who were falsely credited with paternity. There are several other conversations that will arise from the collection as well. I would like to suggest that the conversations that stem from the narratives are positive and used to build up and educate rather than being negative and used to break down and berate.” (Matthews, 2010)

Any cookies that may not be particularly necessary for the website to function and is used specifically to collect user personal data via analytics, ads, other embedded contents are termed as non-necessary cookies. It is mandatory to procure user consent prior to running these cookies on your website.