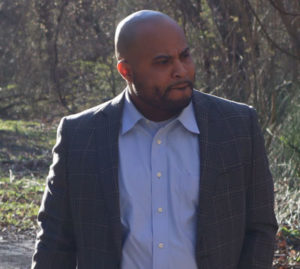 Dr. M. L. Matthews is an author, producer, and doctor of education. He overcame a tumultuous childhood in Memphis to thrive in the Lionel Linder Journalism Camp, a high school outreach program that turned his life around. Cosponsored, among others, by the University of Memphis and Memphis City Schools, he received one of only two college journalism scholarships offered by the program and began his studies at Memphis.

As an undergraduate, Matthews worked as a reporter and editor for his campus newspaper and interned for the Birmingham Post-Herald, the Associated Press, The Commercial Appeal, and the NBA’s Memphis Grizzlies.He earned his bachelor’s degree in journalism in 2003 and taught English, speech, contemporary issues, and African-American Literature in Memphis City Schools before receiving a master’s in the art of teaching from Memphis in 2007.

Ten years later, he received his doctorate in higher and adult education at Memphis, where he coordinated the program that helped send him through college. Matthews has also served as a literacy specialist and a behavior analyst for the Achievement School District, a state-run school district serving Tennessee’s lowest performing schools. Matthews also served as a behavior specialist, instructional facilitator, and dean of students for Shelby County Schools. As a dean in a Memphis middle school, Matthews led the Response to Instruction and Intervention – Behavior (RTI2-B) Team that facilitated a 26-percent reduction in out-of-school suspensions in one school year.

Today, Matthews is a school leader in Memphis and the executive director of the Matthews-Fayne Foundation, a nonprofit group that supports education initiatives for urban youth.The foundation focuses on supporting students with adverse childhood experiences, promoting access and retention in higher education for minority, underprivileged, and at-risk students, and building partnerships between corporations and educational institutions.

His first book, I Am Not the Father: Narratives of Men Falsely Accused of Paternity, and the namesake documentary that aired on cable television were featured on the Maury Show in 2012. His children’s book, Runners, was released in 2011.

In terms of training, Matthews has trainer of trainers experience in the areas of Socioemotional Learning and Educational Equity and Implicit Bias. He also has been trained in Kingian Nonviolent Conflict Resolution and Restorative Justice.

His third book, “Urban ACEs: How to Reach and Teach Students Traumatized by Adverse Childhood Experiences” serves as a guidebook for educators and parents who are supporting traumatized students and is scheduled to be released December 2019.